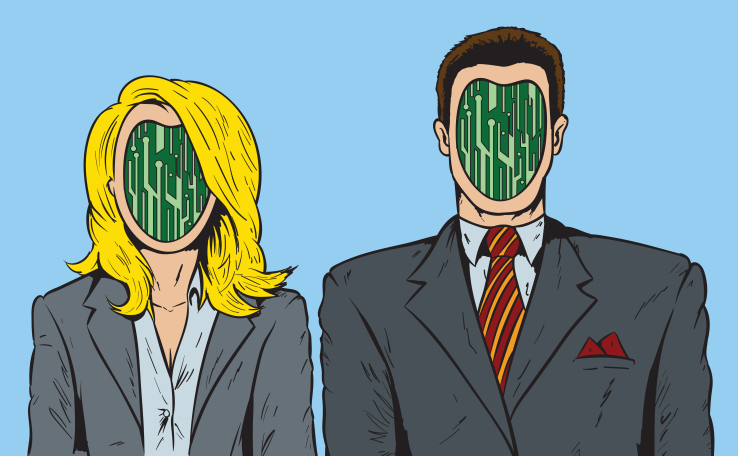 Think about it this way: I work in your company, I wash the dishes. You buy a dishwashing machine. You can either say “David, good luck!” or you can say “Let’s rock!”

“Good luck” is the task-centered economy. You replace me with a machine. You lower the cost and raise the efficiency. In the innovation economy, this is the race against the machine.

“Let’s rock” is the people-centered economy. You buy a machine so that we can do more valuable stuff together. You raise my value and that of the team. By the way, you lower the cost and raise the efficiency, too. This is the race with the machine, not against it.

So let’s say I’m sick and tired of washing dishes and we can’t think of anything else to do together. I am not adding value to your team. You are not adding meaning to my life. We should not be working together. It’s time for me to leave the company. The dishwashing machine is our savior.

In the people-centered economy, before quitting, we look at each other and ask “How much value is there in our relation?” and “What is the best value we can create together in this company with this relation?” While in the task-centered economy, dishwashing machines pass the Turing test. You, as a businessman, see no difference between me and the dishwashing machine. The value is only in the tasks I perform. Thus, my race against the machine.

“Worldwide, only 13% of employees are engaged at work. The vast majority of employed people around the globe are ‘not engaged’ or ‘actively disengaged’ at work, meaning they are emotionally disconnected from their workplaces and less likely to be productive,” according toGallup, which says the world’s GDP will triple in the next three decades. $140 trillion worth of new customers is up for grabs. And since it’s the innovation economy, the winners will be the teams that answer the question “What is the next big thing and how do we take part in it?” Requires engagement.

That’s why the people-centered economy is a huge opportunity for wealth and wellbeing. There are trillions of dollars to be made in raising the value of people, which are, perhaps, our world’s most under-utilized resource.

What’s more, any economy that cares less about people than about tasks will ultimately screw up. In the task-centered economy, the only reason we don’t get rid of each other right away is because we can’t. Now we believe we might be able to, so we get stuck in a paradox: Our self-interest is not in our self-interest.

Okay, it’s not “simply.” Because, actually, it’s not simple at all. We need to change the way we view the economy, reinvent economics, introduce new tools and methods. Today there is such a focus on skills and specified tasks. We can hardly imagine a society where jobs don’t have descriptive labels like “painter,” “cook,” “programmer” and so on. My job is “David,” which doesn’t quite fit the pattern, but through some kind of miracle I manage to put food on the table. I can tell you, it’s not easy.

How did I get here? Well, there are two types of careers. You can either learn something and then go do it. Or you can learn something and then go do something else. I followed the latter career path. I started as a researcher in molecular quantum physics, continued as science editor of a computer magazine, then I went into science and technology policy and diverged into my own projects, always looking to bridge cultures.

Finally, one day a headhunter told me “you are too scattered, you don’t have any focus. I can’t help you find a job.” Nonsense! I have a perfectly excellent focus. I’m in fact making use of all my acquired skills at the same go by earning a living by being me. A bit sticky to look for jobs, though. Not too many job ads for “David.” It’s more like “programmer with 10 years experience” and such.

Yes, it’s all about fitting the slots it seems. And the slots are changing ever faster. If you are a programmer with 10 years experience and you are away from programming for a year then you might be toast. That’s one of the things that makes the task-centered paradigm a not so very nice prospect in the innovation economy.

The people-centered economy, on the other hand, may just get better and more humane with technology. Instead of fitting the slot, imagine jobs being tailored for each individual. We have the computational capacity for that now. Says Vint Cerf, co-inventor of the Internet: “It is said that everyone is truly unique. We have an opportunity to recognize this by tailoring work to fit individual strengths.”

So many people are not making use of their strengths. Jan Mühlfeit, former CEO and present Chairman of Microsoft Europe, told me that if he went back to being CEO of a large company he would test all employees with Gallup’s Clifton StrengthsFinder and focus on developing strengths instead of patching up weaknesses.

A dating service like Match.com might be a better job market than Monster.com. Because now it’s about building teams of people with good chemistry that can do valuable things together that machines can’t do or have not been suggested to do. Vint Cerf and I published a scenario with such a matching service that we called “Jobly.” The i4j Innovation for Jobs Summit – a network of good brains that we bring together – put their minds to it, producing a whole lot of ideas that gives a picture of how the labor market, policy, education and the economy overall can be transformed into something much better.

I will imagine some will think this is a nice and cuddly vision, but not a practical one. If this is what you think, think again, because the people who are running successful companies are in a constant headache trying to find good people to hire. I have spoken with leaders who want to bypass their own HR departments. They want people who will take their company into the future, not people who fit slots.

“We used to “spray and pray” to find job candidates. Today we can intelligently mine professional networks and approach specific hires. Before long, we’ll be able to get a holistic view of a worker and match against corporate culture and behavioral profiles – the things that primarily determine success for high-performance teams,” he says.

The people-centered economy cares a lot about culture, because that is the operating system of teams. Culture and success go hand in hand,” say Eric Schmidt and Jonathan Rosenberg in their book How Google Works.  They use the word “culture” 50 times in the book, much more often than education (6 times), human resources (7), training (10), résumé (11) and skill (28). Their recipe: recruit the best who match your culture and train them to recruit others.

“Many people, when considering a job, are primarily concerned with their role and responsibilities, the company’s track record, the industry, and compensation. Further down on that list, probably between ‘length of commute’ and ‘quality of coffee in the kitchen’ comes culture. Smart creatives, though, place culture at the top of the list. To be effective, they need to care about the place they work. This is why, when starting a new company of initiative, culture is the most important thing to consider,” they write in their book.

The answer is, the reality of Google is becoming the reality of all. They are just a bit ahead of the rest. Every single organization in the world is now constantly switching tools, methods and aims. Good, creative teams will outperform streamlined organizations with experts that fit the slots and do their things.

A few years ago, I stayed in a coastal village at the Red Sea. There was this Bedouin kid who was deaf and dumb from birth, along with other developmental disorders. He was a good swimmer, though, and he befriended a dolphin. They became such good friends that the dolphin hung out in the waters outside the village every day.

The kid’s family started a seaside cafe and restaurant. Visitors could eat, drink, and swim with the dolphin. The kid and his family would accompany the visitors, not more than a few at a time, because the dolphin needed introduction, and the visitors needed instruction. I swam with the dolphin; it was a unique experience. The restaurant was very popular, of course. The kid’s unique ability had provided for his whole family.

It seems to me that their good fortune can be repeated with variations around the world. It can not be done through the classic HR methods. But it could be done by a smartphone service that can offer tailored personal solutions on a global scale.

As for the discussion about machines being able to do everything of value, making people superfluous, that’s a tell-tale sign of of how people can not think beyond the task-centered economy. Does anyone seriously believe that in a few decades machines will have replaced humans in doing everything we consider valuable? Stopping climate change? Eradicating disease? Erasing poverty? Of course not. This will be done only with the people-centric innovation economy that uses machines to elevate the value of people, empowering them. Not replacing them.

It’s time to challenge ourselves to develop a people-centered economy if we are going to be the change we want to see in the world.

5B people are of working age. 3B want a job. 1.3B have one. 13% are engaged. Almost nobody has a job that fits them. Humanity creates a $75T world economy, running at a fraction of its capacity. If everybody had a job that fitted them, everyone would be much happier and humanity would be creating many times more value than today.

Tailored jobs for everyone on planet earth is becoming possible for the first time with high smartphone penetration and new infrastructures like cloud computing and big data analytics. We are at the beginning of a revolution in strengths finding, education, matchmaking, HR and the creation of opportunities in a long-tail labor market.

There is probably a >$100T market for innovations that help 5B people get jobs they love, capitalizing on their unique skills, talents and passions, matching people in great teams doing meaningful work.

Innovation for Jobs: earn by helping others earn better in more meaningful ways.

At the i4j ECO Summit,  entrepreneurs, funders, educators, policymakers and other leaders from the innovation-for-jobs ecosystem will be talking shop around the business of disrupting unemployment.