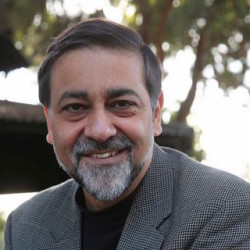 Vivek Wadhwa is a tech entrepreneur turned academician. Wadhwa is a fellow of Arthur & Toni Rembe Rock Center for Corporate Governance atStanford University, Director of Research at the Center for Entrepreneurship and Research Commercialization at the Pratt School of Engineering of Duke University, and Distinguished Fellow atSingularity University. In Stanford and Duke, he lectures in class on subjects such as entrepreneurship and public policy, helps prepare students for the real world, and leads groundbreaking research projects. He oversaw research and innovation at Singular University as exponential advances in various fields such as robotics, A.I., computing, synthetic biology, 3D printing, medicine, and nanomaterials are making it possible for small teams to do what was once possible only for governments and large corporations to do: solve the grand challenges in education, water, food, shelter, health, and security. As a researcher, Wadhwa has studied the impact of globalization on U.S. competitiveness and remedies for the U.S. to keep its edge. Wadhwa’s research at Duke University has focused on the impact of globalization on the engineering profession, the competitive threat from India and China, and one of America’s greatest advantages – its skilled immigrants. This research has received worldwide attention and acclaim. He has been also a senior research associate at the Labor and Worklife Program of Harvard Law School, a visiting scholar at the School of Information at UC-Berkeley, and a Distinguished Visiting Scholar at The Claus M. Halle Institute for Global Learning at Emory University.

Prior to joining academia in 2005, Wadhwa founded two software companies. He started his career as a software developer and his quest on helping solve some of I.T.’s most daunting problems began at New York–based investment banking powerhouse CS First Boston (CSFB), where he was Vice President of Information Services. There he lead the development of technology for creating computer-aided software-writing systems that was so successful that CSFB decided to spin off that business unit into its own company, Seer Technologies.  As its Executive Vice President and Chief Technology Officer, Wadhwa helped grow the nascent startup into a $118 million publicly traded company. With the explosive growth of the Internet, he founded Relativity Technologies, which was declared by Fortune magazine as one of the 25 coolest companies of the world and for which he earned the title Leader of Tomorrow from Forbes. He was also named by Foreign Policy Magazine as Top 100 Global Thinker in 2012. In 2013, TIME Magazine listed him as one of The 40 Most Influential Minds in Tech.

He is founding president of the Carolinas chapter of The IndUS Entrepreneurs (TIE), a non-profit global network intended to foster entrepreneurship. He also acts as an advisor to several governments; mentors entrepreneurs; and is a regular columnist for The Washington Post, Huffington Post, Wall Street Journal Accelerators, LinkedIn Influencers blog, Forbes, the American Society of Engineering Education’s Prism magazine, and previously, for Bloomberg BusinessWeek.

Wadhwa holds a B.A. in Computing Studies from the University of Canberra, in Australia, and an MBA from New York University. He authored the books “The Immigrant Exodus: Why America Is Losing the Global Race to Capture Entrepreneurial Talent”—which was named by The Economist as a Book of the Year of 2012, and “Innovating Women: The Changing Face of Technology”—which documents the struggles and triumphs of women.